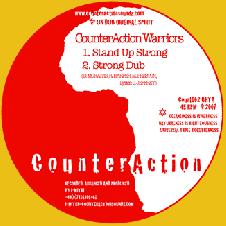 A SIDE
Counteraction Warriors:
Stand Up Strong + Strong Dub